Warning: Use of undefined constant WPE_CLUSTER_ID - assumed 'WPE_CLUSTER_ID' (this will throw an Error in a future version of PHP) in /home/customer/www/enviableworkplace.com/public_html/wp-content/mu-plugins/wpengine-common/plugin.php on line 14

Warning: Use of undefined constant PWP_NAME - assumed 'PWP_NAME' (this will throw an Error in a future version of PHP) in /home/customer/www/enviableworkplace.com/public_html/wp-content/mu-plugins/wpengine-common/wpe-sec.php on line 63

Warning: Parameter 2 to WPE\Site_Preview::the_posts() expected to be a reference, value given in /home/customer/www/enviableworkplace.com/public_html/wp-includes/class-wp-hook.php on line 292
 Alibaba Company Culture Case Study: East meets West

In the next few minutes you’ll learn the mindset of a great teacher wanting to get the best out of his people – while growing a Chinese Silicon Valley-esque global trade company – which now shifts more money than Amazon AND eBay combined.  D a m n.

And Jack Ma might be the founder of largest company you don’t know about, Alibaba. The birth of Alibaba’s company culture, arguably, is the main reason people performed so well… blending the best of the East and West.

1 sentence overview if you are new to the name:

Alibaba: a Chinese e-commerce group with 27,000 employees, started by a sixth form teacher out of his apartment in 1999, with a market cap of 215 billion and the worlds largest IPO to date. 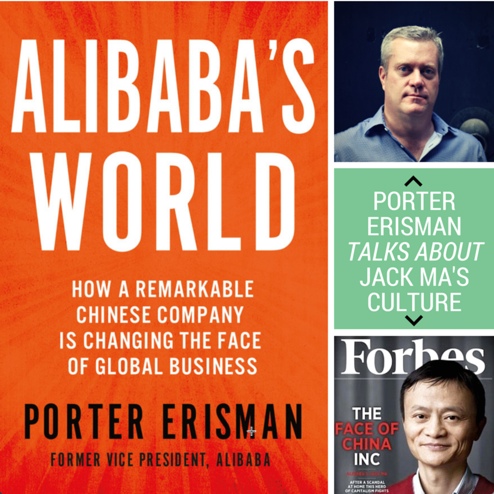 Briefly, do you know how Chinese management style differs from the West? This different culture helped Ma boldly lead massive upward momentum… (such as setting specific goals for his employees and then a week or two later tripling the goal – and his employees would rise and meet the challenge.)

Last week, Enviable Workplace had a chat about culture with Porter Erisman, former Vice President at Alibaba and author of Alibaba’s World: How a Remarkable Chinese Company Is Changing the Face of Global Business

. Porter interviewed for the company in 2000 when there were just 45 employees (now there are over 27,000) and left in 2008. He got to witness the maturation of Alibaba’s company culture and now shares these 6 areas with us:

2. Patience is a Virtue? How Alibaba used patience to outmanoeuvre eBay

4. If you have to pick one: Hire all-stars or a team that works well together?

5. How employee mistakes, and ego, are handled

6. Rejecting Up or Out Career Progression

What is the point of Alibaba? Purpose?

…or as Simon Sinek would cooly pitch: “What’s the why?”

And to achieve this, Alibaba’s customers need to win before Alibaba’s profits.

“We would first, and Jack would remind us, make sure our website users were making money, and only after they were making money would we make money. Jack Ma was great at making people chase after the goal – and not after him. We were trying to achieve the goal, not just to please him.”

When you look at Alibaba’s competitors (such as eBay), every one of them “should have beat Alibaba.” Except their competitors were following Wall Street’s expectations… right off a cliff.

In 2000, all the Wall Street analysts were saying the end goal was to build an end-to-end transaction system… That you could order 20,000 tennis rackets online at the click of a button from a seller in China. But Alibaba realised that that’s not what their customer wanted. So they pushed back against these analysts and focused on the customer.

For a look at Alibaba’s official stance check out their Culture & Values page.

Alibaba knew eBay’s investors didn’t have the patience we had to prevail in China. So they took a number of steps to put pressure on eBay to make the Wall Street investors think that they were mad men willing to never charge money for the website – and that allowed them to survive.

The main KPI for the management team was to create a certain amount of jobs for the TaoBao users.

In the early days, Jack told the team they needed to create X million jobs this year. “If you bring in revenues past a certain goal, I will penalise you. Because it means you are trying to make too much money from the site at this point.” 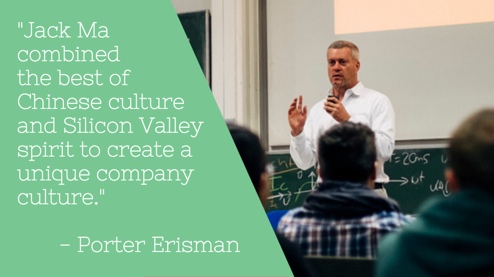 Jack Ma led meetings the same way a teacher might lead a class. He “encouraged suggestions but where he needed to be, strict. Being a former teacher made him a great leader of an inexperienced team like ours – his goal was to help us develop into really good managers.”

When you look at Alibaba and a typical Silicon Valley start up, it carries a familiar idealism. By now, most people are sceptical of tech companies wanting to change the world. “But that’s what we believe and that’s what we ended up doing, in a way.”

There are very Chinese things about it too. On Porter’s first company outing, their first retreat felt like a family affair. Chinese management style is more group oriented. It’s more focused [compared to the West] on including people.

If you look at Western companies they usually have about two co-founders, well Alibaba had 18 co-founders. “Chinese companies can, maybe, manage group leadership better than in the west – which tends to be more individualistic.”

What’s better, hire all stars or a team that works well together?

It’s more important to find a team that works well than a dream team made up of all-stars with great resumes – “we tried that at Alibaba, a team of western managers with MBAs and really nice resumes.. but the team didn’t work well together.”

In Eric Shmidt’s book, How Google Works, they talk about hiring divas and trying to cultivate them, “I take a different view. It’s better, it’s more fun to work with a team where everyone is focused on a goal and less on themselves. People with egos would get spit out of the company over time. It’s ok to have an ego as long as your goal is to see the company succeed. If you put that goal of your own ego than you are helping the company.”

How Employee Mistakes Are Handled

When Porter joined he came in with this layer of managers that was western style perfectionist… but Jack Ma would tease him that there was a reputation in the company that “the western managers would do a lot of analysis but take less action while the Chinese team was more about action and results than analysis.” In Chinese there’s a saying, Actions speak louder than words.

“I was in charge of the international website and I think for Jack’s taste I was moving too slowly. He told me, Porter, I’m not going to get mad at you for making mistakes, but I can’t accept you doing nothing. If you do something and make a mistake, fine. But if you do nothing, I’ll replace you.”

Rejecting Up or Out Career Progression

When Porter was at Alibaba, his title changed 8 times in 8 years. After every year management would rotate positions depending on what the team’s need was. Almost like a basketball team uses substitutes depending on what mode of attack the team is in.

One nice skill in Alibaba, “and I think this is more Chinese: it wasn’t just up or out for managers. If you rose in the company and found yourself in a position that maybe wasn’t the best fit, Jack Ma was good at allowing you to save face and gracefully move to another role.. that role might be of lower status, but you could stay within the company.”

For example: One of the cofounders was placed in a sales role in Shanghai – “He was probably the worst sales person in the office. Even I thought that this might be the end of the road for this guy.” Well Jack Ma saw what he was good at and put him in charge of the Chinese language website. And he rose to the top and became employee of the year.

It’s hard when you go down one route and haven’t succeeded. Most companies spit these employees out. But when a startup is growing quickly you can’t afford to lose high potential people just because they were in the wrong role for a short time.

One of Alibaba’s core values that everyone was evaluated on was “embrace change”. Something western startups can learn from this: management can be done more in a consensus basis rather than the western way.

Warning: Parameter 2 to WPE\Site_Preview::the_posts() expected to be a reference, value given in /home/customer/www/enviableworkplace.com/public_html/wp-includes/class-wp-hook.php on line 292